Nothing is more frustrating than making an investment in hardware or software that is supposed to increase sales, productivity or profitability, only to discover it does not. Too many companies make investments in new technology that never achieve their goals. In this article, we will offer one reason why this occurs and offer a possible solution.

Elon Musk, the CEO of the electric car company Tesla, invested heavily in the robots used to manufacture the company’s newest model only to find production had not improved but slowed down.

Discussed on a recent episode of 60 Minutes, Musk explained that this slow down almost put the company out of business. Musk thought he had created a world class manufacturing operation using robots. But unexpected problems occurred, and the robots kept breaking down, creating slowdowns or bottlenecks in production. 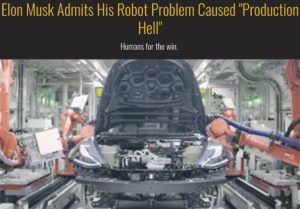 For most people this may sound counter-intuitive, but it is understood by believers of the 1984 best-selling book “The Goal” written by Goldratt and Cox. It is considered one of the best books on operations and manufacturing. Early in the book, the hero Alex Rogo meets his former operations Professor named Jonah at a manufacturing show and has this interesting conversion:

That is the bottom-line question. Are you using the right measurement? We see this in our consulting work all the time. Someone wants to make make an investment look good, even though it is not working as well as it should. For example, your new Print MIS system is not resulting in faster estimates or your Web-to-print is not reducing your staffs’ time for order entry, so some people create a new measurement. Changing your KPIs (Key Performance Indicators) to make your investment look good is the wrong approach. The right approach is to find the root cause and overcome it until your KPIs improve.

The Impact of Bottlenecks on Workflows

“The Goal” demonstrates the impact of bottlenecks on production workflows. It shows that every workflow has a bottleneck. Overcome that bottleneck and the entire workflow is more productive. The ideas in the book have become a formal management theory known as the Theory of Constraint which explains that workflows are filled with bottlenecks, not only the largest one but a series of smaller ones that are often masked by the larger bottleneck.